It had been noted by Plagge (1938) that although the implanted brain would cause pupation in Deilephila larvae from which the brain had been removed, it would not induce pupation in the posterior fragments of ligated larvae.  The significance of this was proved experimentally by Willians (1947) who repeated the experiment on the diapause pupa of Platysamia.  A chilled brain implanted in the isolated abdomen of the pupa in diapause will not induce development, whereas it will cause development of the anterior half from which the brain has been removed.  On the other hand, the isolated abdomen will develop if it is provided with a chilled brain plus prothoracic glands. 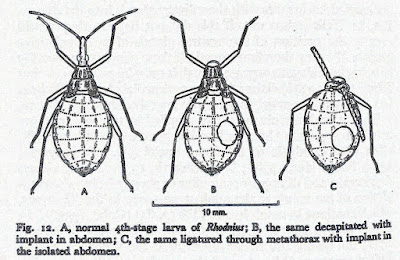 As in Rhodnius, the actual source of the secretion in the brain is the neurosecretory cells.  But if chains of decapitated pupae are employed and a chilled brain is implanted into the first member, development is renewed in the entire series, which may be as much as 24 cm in length.

The Physiology of Insect Metamorphosis
V. B. Wigglesworth
Posted by Albert Pigault du Framboise at 12:17 AM No comments:

in search of lost time

"Since I am heading off into the future, I will be helped by the scuff marks left on my sandals from when I stumbled in the past.

May everything my hand touches and my eyes see and my mouth tastes be different, but the same.  That way, all those things will cease to be still and instead will explain to me why they have been with me for such a long time; they will reveal to me the miracle of reencountering emotions worn smooth by routine."


- Transcription from the Manuscript Found at Accra
Posted by Albert Pigault du Framboise at 11:52 PM No comments:

symptoms of the fox possession

Nogitsune (wild foxes) will possess a person, but not high-class foxes -- and their victim will blurt out such things as:
" I am God of Inari" -- or "Let me eat azuki-meshi."
When possessed by a high-class fox, however, the victim will appear like a true sick person.  So the patient can be put under the care of a doctor.  The doctor, however, cannot tell whether his patient is possessed by some phantom, or mentally deranged.
"The Kitsune-tsuki patient will look sometimes mentally deranged; and other times will appear to be sane and sound.  The condition of the Kitsune-tsuki patient is different during the day.  At night, he will find it hard to go to sleep -- or sometimes will try to commit suicide in desperation.
"The patient has a strange habit.  He will not allow any person to come near him when taking his meals and he is particular about what he eats, and likes to keep company with persons inferior to himself in intellect.
"He will avert his eyes from other people when sitting opposite them.  He will invariably turn his face aside or drop his eyes, putting both his hands on his knees and shrugging his shoulders.

The cause of Kitsune-tsuki may be attributed to:

the vestal androgyny of the ant maiden 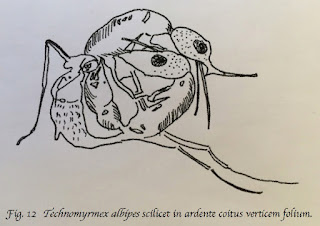 "By far the most startling discovery in relation to this astonishing civilization is that of the suppression of sex.  In certain advanced forms of ant-life sex totally disappears in the majority of individuals; in nearly all the higher ant-societies sex life appears to exist only to the extent absolutely needed for the continuance of the species.... No indulgence of any natural appetite is possible except to the degree in which such induglence can directly or indirectly benefit the species; even the indespensable requirements of food and sleep being satisfied only to the exact extent necessary for the maintenance of healthy activity."

Supposing that such a discovery were made, and that the human race should decide to arrest the development of sex in the majority of its young -- so as to effect a transferrence of those forces, now demanded by sex-life to the development of higher activities -- might not the result be an eventual state of polymorphism, like that of the ants?  And in such event, might not the Coming Race be indeed represented in its higher types -- through feminine rather than masculine evolution -- by a majority of beings of neither sex?" 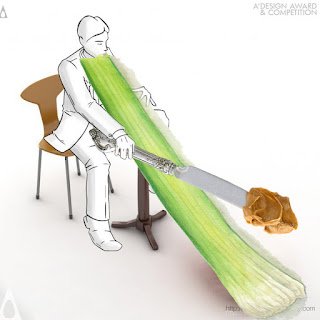 Posted by Albert Pigault du Framboise at 9:50 PM No comments:

five simple tips to brighten up your palatial estate 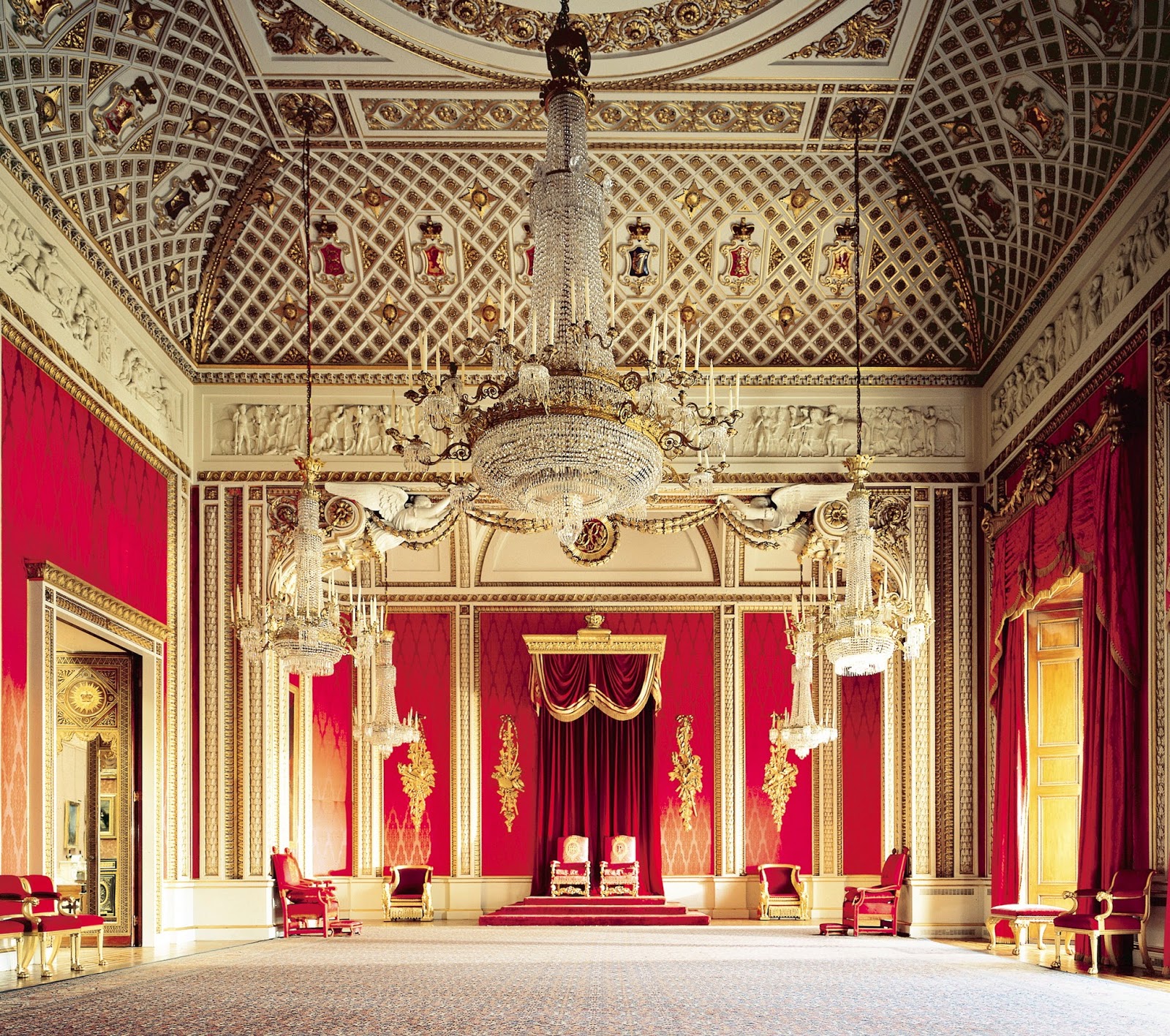 Tip 1:  When in doubt, put in a giant chandelier.  A centralized and well placed light fixture can liven up even the drabest of throne rooms.  And if it happens to look like a rocket ship made of diamonds, then so much the better! Tip 2:  Get creative with table placements!  Having a host of foreign dignitaries over for brunch?  Try a U-shaped dining arrangement to maximize surface area and accommodate those larger international delegations. 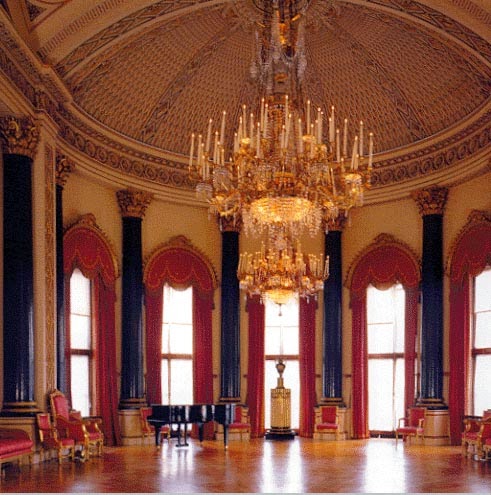 Tip 3:  Just add a piano.  Too many empty drawing rooms?  Turn one into a "music" room, by just adding a large and perfunctory instrument, such as a piano or a harp.  For maximial pretentiousness, choose a cherished museum piece from your private collection and then don't allow anyone to play it. 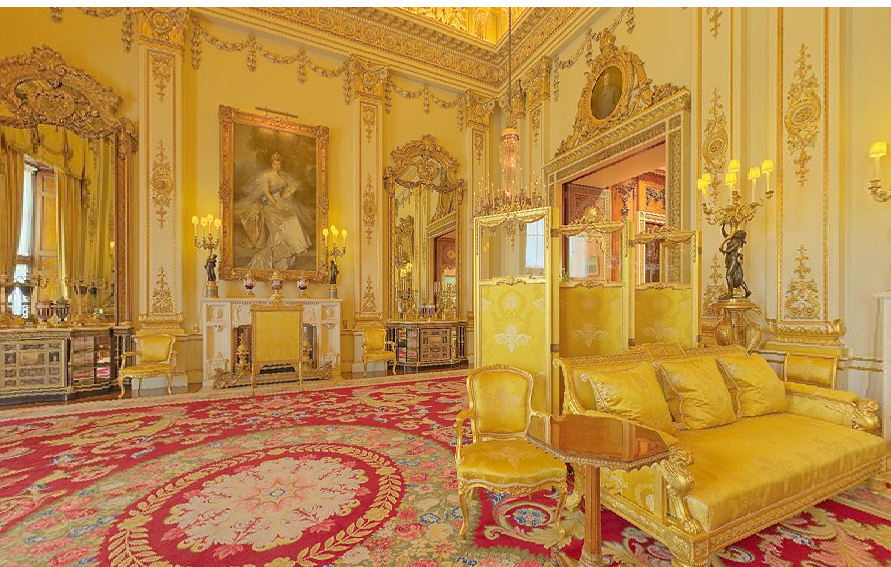 Tip 4:  Play around with color.  As in, a single color.  Try making everything in the room almost exactly the same shade of a single gaudy hue such as gold, silver, or purple.  Nothing says "regal" like monochromaticity. 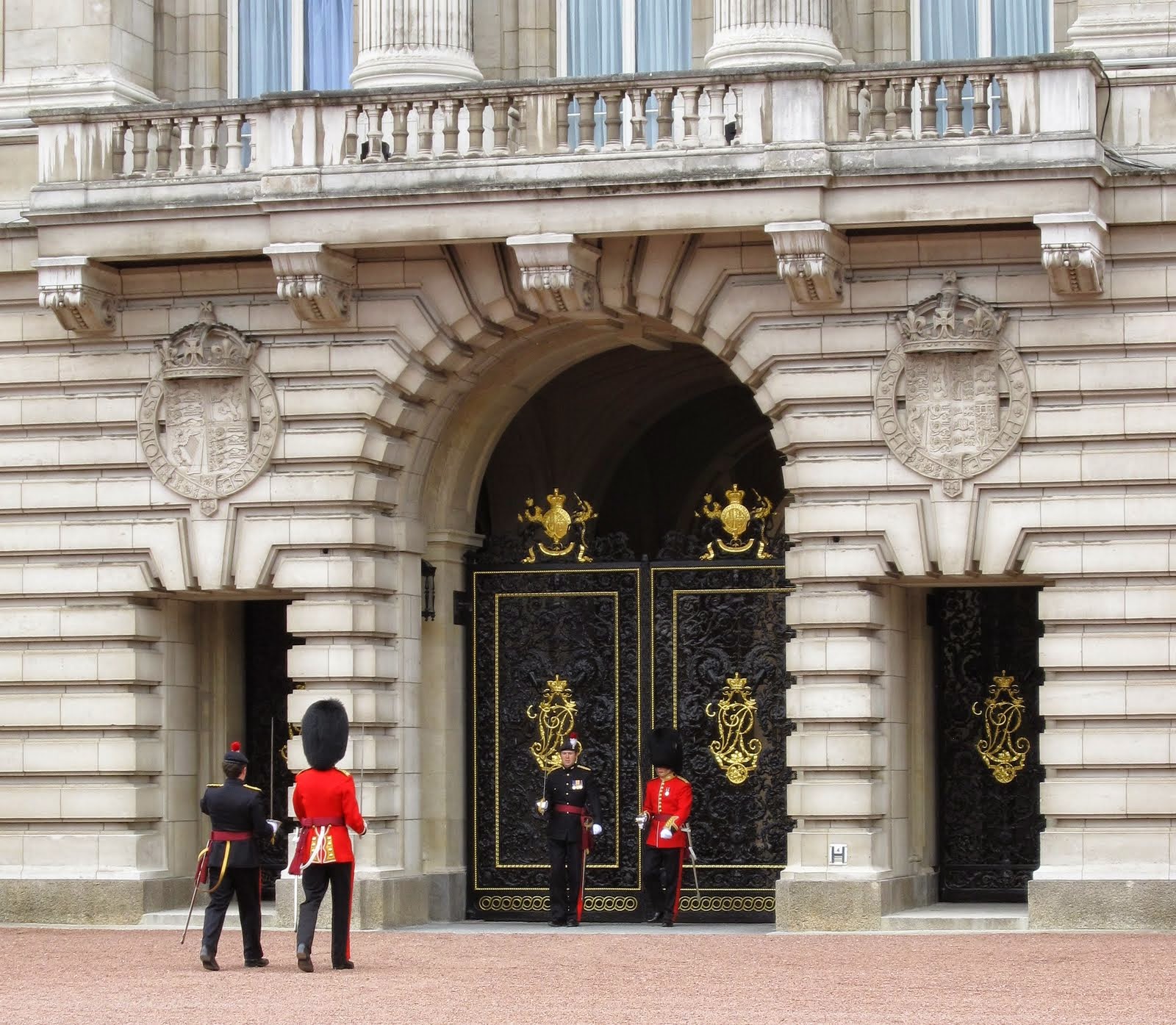 Tip 5:  Keep the entryway simple.  You've already got 20 acres of manicured gardens maintained around the clock by an army of underlings.  No need to go overboard with the front door.  If needed, spruce it up with a pair of colorfully dressed guards.

Posted by Albert Pigault du Framboise at 4:32 PM No comments: